Press enter to begin your search

In part 1 the local core was discussed, and since this post discusses the exercises, I thought now would be the right time to point out what occurs when training the core systems! When training the core, we build what is known as “stiffness”, and this stiffness contributes to spinal stabilization, which allows for optimal movement. You’ll see the core exercises do NOT involve sit-ups/crunches, or exercises common among abdominal training as they aren’t functional or safe. Exercises which cause hypertrophy of the rectus abdominis (superficial/visible abs) require constant flexion of the spine, or bending the spine forward. Since we are sitting a lot and already in a constantly flexed posture, it’s actually better to train what’s known as moments. Moments create spinal stiffness and train the core muscles to activate/stabilize functional movement in response to the torque being placed on the spine. Kinetic moments do not strain the fibrocartilage of intervertebral discs like flexion movement, which is why these core stability exercises are used not only in performance settings, but in rehabilitative settings as well! These core stability exercises will keep your spine healthy and help prevent disc herniation, and/or abdominal tearing. Here is how you gain deep and superficial core stiffness for optimal core stability!

Training the Local Core: Intervertebral Stability (deep stiffness)
Intervertebral Stability (IVS) is only possible through training both types of intervertebral stiffness of the local core. The first type of stiffness is achieved by co-contraction of the transverse abdominus and multifidus by performing an exercise known as “Drawing-In”. The second form of stiffness is obtained by training intra-abdominal pressure with “Belly Breathing” exercises. By having both forms of core stiffness trained, you will have optimal local core stability, which allows for optimal IVS, which then limits excessive compressive, shear, and rotational forces between spinal segments. Now, it’s time to go over the global core!

The Global Stabilization System
The global core muscles are the quadratus lumborum, psoas major, external/internal obliques, rectus abdominis, gluteus medius, and adductor musculature. These muscles transfer loads between the upper and lower extremity and provide stability between the pelvis and spine.

Training the Global Core: Lumbo-Pelvic Stability (superficial stiffness)
By simultaneously activating the abdominals (rectus abdominis), lower back (quadratus lumborum), buttock (gluteus medius) at the same time, you achieve what is called co- contraction of superficial musculature of the spine, which is known as an exercise called, “bracing”. When the muscles are contracting, they are increasing stiffness between the spine and pelvis. A great example of a functional brace is when you stand up from squatting, and simultaneously brace the abs, low back and glutes in effort to stabilize the lumbar spine (the thoracolumbar fascia mechanism also has a role in this).

Core Stability for Spinal Stability
As the eminent Biomechanist, Dr. Stuart McGill once said, “Create a truss”. Think of a stable core as a stable bridge, the deeper the truss, the more stable the bridge! How do we make our core “deep” in effort to become more stable? We train not only the global/superficial core, but the local/deep core too! When both core systems are stabilized, we then have core stability, which means….optimal Spinal Stability!

Muscle Imbalances
When correcting posture, there is something known as “reverse posturing”, where we take you out of an “anterior dominant” posture into a positional relief position/posture. Unfortunately, all too often muscle imbalances develop just by having faulty posture, so now it’s time to understand how muscle imbalances work and how we can fix them! The driving force behind reverse posturing is balancing flexor synergies (tonic system/facilitated) and extensor synergies (phasic system/inhibited), which is really just lengthening muscles prone to tightness and stabilizing muscles prone to being weak. These two functional muscle systems are based on phylogenetic development, a concept popularized by Dr. Janda. Before going over the cool local/global core exercises, I want to digress a bit and talk about posture and muscle imbalances (oh, yay!)

Just like the man at the computer in the picture above, when we end up sitting; in the car, at work, at home, and talking on the phone and even texting, we end up causing pathological posture (and movement). A postural disorder known as “Upper Crossed Syndrome” can be caused by constantly maintaining bad posture. The musculoskeletal treatment for this postural disorder was made famous by the Czech Neurologist, Dr. Vladimir Janda. Janda saw how certain muscles, specifically the upper trapezius/levator scapulae, and sternocleiodmastoid (neck musculature), and pectorals (chest) were prone to being “facilitated”, meaning tight/overactive, and the deep cervical flexors (sub- occipitals), and lower trapezius and serratus anterior were prone to being “inhibited”, or weak/inactive. Constantly sitting can cause these muscle imbalances to develop, which causes dysfunction and later, pain. Pain can cause what is known as “Antalgic gait”, which is simply pain altered movement; a great example being limping while walking or running. Something known as the “kinetic chain ripple effect” postulates that pain/dysfunction can travel through the body, effecting several segments. Now, think about this scenario; bad posture causes muscle imbalances, muscle imbalances cause antalgic gait, antalgic gait causes altered movement, altered movement causes injury, this illustrates how determining the source of pain/injury can be tricky. By the time pain is present, the cause may be far from the sight of pain! Lastly, overuse injuries are common among runners and unfortunately most runners end up “speed limping”, and not actually running with normal mechanics…now, this can be tricky, some may ask the question, “Is the pain causing bad movement, or is bad movement causing pain?”, this is when a qualified trainer/rehab specialist or doctor typically comes in to assess your movement, but, even IF you have perfect running mechanics/gait, if you’re running without maintaining normal length-tension relationships (tissue extensibility/capsular mobility), force-couple relationships (synergist activation), then regardless, you will alter your joint arthokinematics (joint mechanics/integrity), which will cause altered neuromuscular control of movement, and ultimately cause pain, and or injury down the road!

Local Core and Global Core Training
To recap, the local core is made up of slow twitch muscle fibers suited for endurance, and sensory receptors which detect change in muscle length. Since the local core maintains posture, respiration, and body awareness (position of body parts), it makes sense to train all of these functions. The global core transfers loads between the upper and lower extremity, and provides stability between the pelvic and spine. The global core provides both static and dynamic stability by simultaneous bracing of the abdominals, low back, and glutes in response to rotation, lateral flexion, extension and flexion.

Progression:
#1. Supine Breathing: begin with one hand on sternum and one hand on stomach. When practicing belly breathing for the first time, it tends to be easier to start here. Using your hands gives you instant feedback as to whether you are breathing in too much with the accessory muscles instead of your principal muscles. 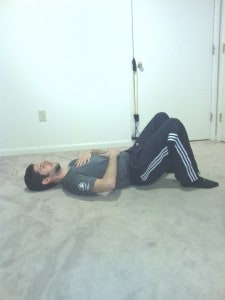 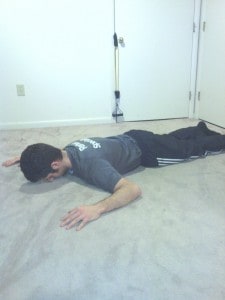 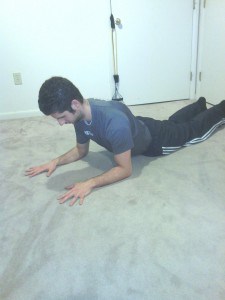 Practice in whichever position of belly breathing you feel most comfortable. Perform for at least 3 min and no more than 10 minutes when first starting. Breathing tempo: 2-6 second slow inhale, 2-4 second hold, 5-10 second slow exhale. Make sure 360 degree expansion occurs in the front, sides, and back of torso when inhaling.

Body Awareness Correctives:
Drawing-In: While lying down supine, begin by slowly “hollowing”, or pulling your navel in as if a string is pulling your navel back to the floor. Perform 2-3 sets of 12 repetitions 1-2x per day. http://www.youtube.com/watch?v=_u-yldYKpeQ

Global Core Exercises
Ab March w/ Wall Press: By pressing the wall you engage your anterior core and depress the ribs. Back is in contact with the floor. Perform 2-3 sets timed for 30-60 seconds each. http://www.youtube.com/watch?v=zv4f1p3YH9Q

Dead Bugs: Sequence your inhales on the way down, and full exhales at the bottom. Back is in contact with the floor. Perform 2-3 sets for 12 repetitions per side. http://www.youtube.com/watch?v=HsK8qPeYTzY

Static plank 2-3 sets working up to 90 seconds (starting with 30 seconds and resting 30 seconds, always 1:1 ratio of work to rest), once 90 seconds is possible, move onto the second plank for 2-3 sets of 12-15 arm or leg raises, and then the arm and opposite leg raise for time, possibly working up to 60-90 seconds. http://www.youtube.com/watch? v=jNDAjpwKxTk

Bird Dog Series: The first bird dog is a regional movement arm or leg raise, then move onto the global movement bird dog with arm and opposite leg raise, and if that isn’t hard enough, try the “squares” where you move the arm/leg out and down and back, and lastly, the bird dog with supporting leg foot raise for even more dynamic stabilization! Perform each exercise for 2-3 sets of 10-12 repetitions. http://www.youtube.com/watch?v=W- iMMcRcY9c

Pallof Press Series: The pallof press series trains anti-rotation, anti-extension , and anti- flexion. Begin by keeping the core braced/tight and then press the cable out while seated on stability ball. For the last part, when facing away from the pulley, make sure you alternate pressing from “shoulder to shoulder”. The next step would be to place even greater stress on the lumbo-pelvic-hip complex by standing upright! Perform 2-3 sets of 10-12 repetitions in each direction. http://www.youtube.com/watch?v=yISroiXVdd8

I hope everyone reading this enjoyed it and will give these exercises a try!

Part 3 will have advanced functional exercises, as well as stretches/movement prep.